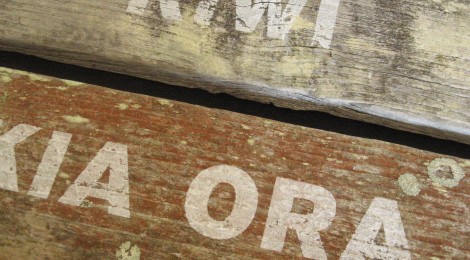 We Don’t Own Our Own Culture – It Owns Us

kirsch artist / February 10, 2011 / Comments Off on We Don’t Own Our Own Culture – It Owns Us / All Artworks, Language, Maori and Pakeha, NZ Culture, Project Art, Recycled Wood, Screen Print, Words Of Ours

There has been an ongoing debate on ownership and even the introduction of copyright ideas towards elements of traditional NZ culture, however it appears the debate is off the mark as you can’t own a language, nor a culture. If there was a question of ownership at all then the language would be the subject and we the object. We are the ones being owned by our cultures. We say: “my” language, and “my” culture, while in effect we stand in their power.

The near complete loss and erasing of the traditional culture of this land through colonization has led to an understandable cautious attitude amongst Maori, protecting that which is slowly re-gained by today’s descendants. In the same way, distrust towards Pakeha, descendants of the colonizing powers, is understandable in this view. However in the end we’re all settlers – or decendants of settlers of this land – only with different origins and varying numbers of generations dating back.

And much like with culture, we can not really own land. Rather does it owns us, it shapes our way of being, as it shapes our culture. Our western idea of land-ownership is narrow and limited. Does a wave own the water that it consists of? Can you own anything but your actions? Do you even own your own thoughts? Or are they simply a result of the cultural outlook which governs your mind?

An operating system on a computer is made for that type of computer. You can’t install the same system on a different hardware. The system and the hardware have to match. Parts of different systems (and of hardware) are not easily compatible and inter-changed. The western cultural model was generally not well suited to new lands and societies, except when these were forced to become western. We need to understand and recognize aspects of  ‘native operating systems’ that are more wholesome and well-suited for the sustained running of the ‘local hardware’ than those of the introduced western-based system. A merged, new system will need to be able to run harmoniously with all these different components, which may be not without challenge.

Ultimately an update of the cultural operating system, our contemporary New Zealand culture, is needed, just as the hardware, the land, has evolved through change also. This new OS can draw on the best  elements of both the previous systems, and be optimally suited to the requirements of today and evolve along the path of time into the future.

Distrust can be transformed into confidence, and thus enable co-existence and inspiration, allowing the developing of a shared and mutual way forward which acknowledges the uniqueness and benefit both sides had and have to offer, and which also acknowledges the uniqueness generated by the growing-together of the two, and which defines our Aotearoa NZ culture as a whole in this world today.