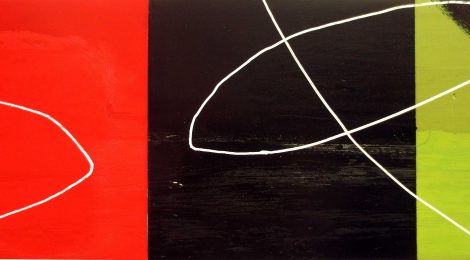 Bold hand painted elements juxtaposed with delicate fine lines dominate these works in which the artist further explores the Kauri theme. Thin, delicate lines are contrasted by dark, black and threatful elements that remind us of the angles found in the composition of the Junion Jack, the British flag. Kauri have been around for over  20 million years, yet the colonial discovery of New Zealand and her abundant resources in the 1800’s, in particular the vast Kauri forests, led to near wipe out of these mighty trees. Kauri play an important role in Maori culture and are regarded as a taonga, a treasure. Of the vast northern stands of Kauri we have less than half a percent left as they were extensively logged for timber as well as fuel for ore roasting kilns in gold mining. It is surprising from today’s point of view that Kauri milling only ended in about the 1970’s. The few remaining Kauri are further jeopardised by the outbreak of Phytophtera, also known as Kauri Dieback disease, and which was only confirmed at the beginning of this millennium. A huge national concerted effort is now being mounted in an attempt to control the spread of this soil borne pathogen in order to ‘keep Kauri standing’. The mighty trees’ survival is in peril, their cultural significance and their frail lifeline repeatedly threatened by post colonial after effects.

← Where Are You a From, Jake Sully?